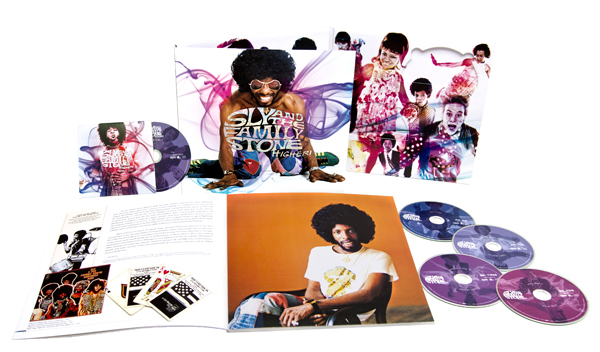 In a new review of Sly & The Family Stone’s Higher! 4-CD box set in stores this week, Pitchfork has praised the collection and given the set a rare 9.0 rating along with naming it Best New Reissue! Here is some of what they had to say:

Amazingly, Higher! expands on Sly & the Family Stone’s history and big-picture role in the development of pop and soul, acting as that rare box set that works as both an introduction for the unaware and a deep excursion into further context for dedicated fans. The major selling point for the physical media edition is an exhaustive run of annotated liner notes, the kind of detail-intensive minutae that satisfies curiosities alongside the usual supplement of rare photos and merchandise detritus. But the musical material alone is an attraction in itself, with 17 unreleased tracks and a good number of underheard ones to go with the big hit singles. …It’s a perfectly balanced mix of stuff casual fans know and stuff even obsessives haven’t heard.

Read the complete review at Pitchfork.