The music of Sly & The Family Stone is celebrated with a new 4-CD box set, Sly & The Family Stone’s Higher!, available everywhere August 27th through Epic/Legacy, a division of Sony Music Entertainment. Released in celebration of Sly Stone’s 70th birthday, Higher! is the first career-spanning anthology to celebrate the musician whose funk has influenced everyone from Miles Davis and Michael Jackson to Public Enemy and the Roots. Housed in a colorful slipcase with a lavishly-illustrated 104-page book, the box set will feature 77 tracks, 17 of them previously unreleased.

Spotlighted throughout the first three CDs of Higher! are rare mono single masters of every classic Sly & The Family Stone signature hit like they’ve never been heard before in the digital era. Paying homage to the golden age of transistor radios are mono versions of “Dance To the Music,” “Everyday People,” “Stand!,” “I Want To Take You Higher,” “Hot Fun In the Summertime,” “Thank You (Falletinme Be Mice Elf Again),” and many others, more than 30 mono single masters and mono album cuts that were a call-out to get up and dance, dance, dance. Decades after the chart debut of Sly & The Family Stone with the game-changing “Dance To The Music,” fans and newcomers will have the opportunity to dig into this far-reaching anthology, covering the recording career of Sylvester Stewart starting in 1964, and the band he masterminded from 1966 to 1977 on Epic Records. 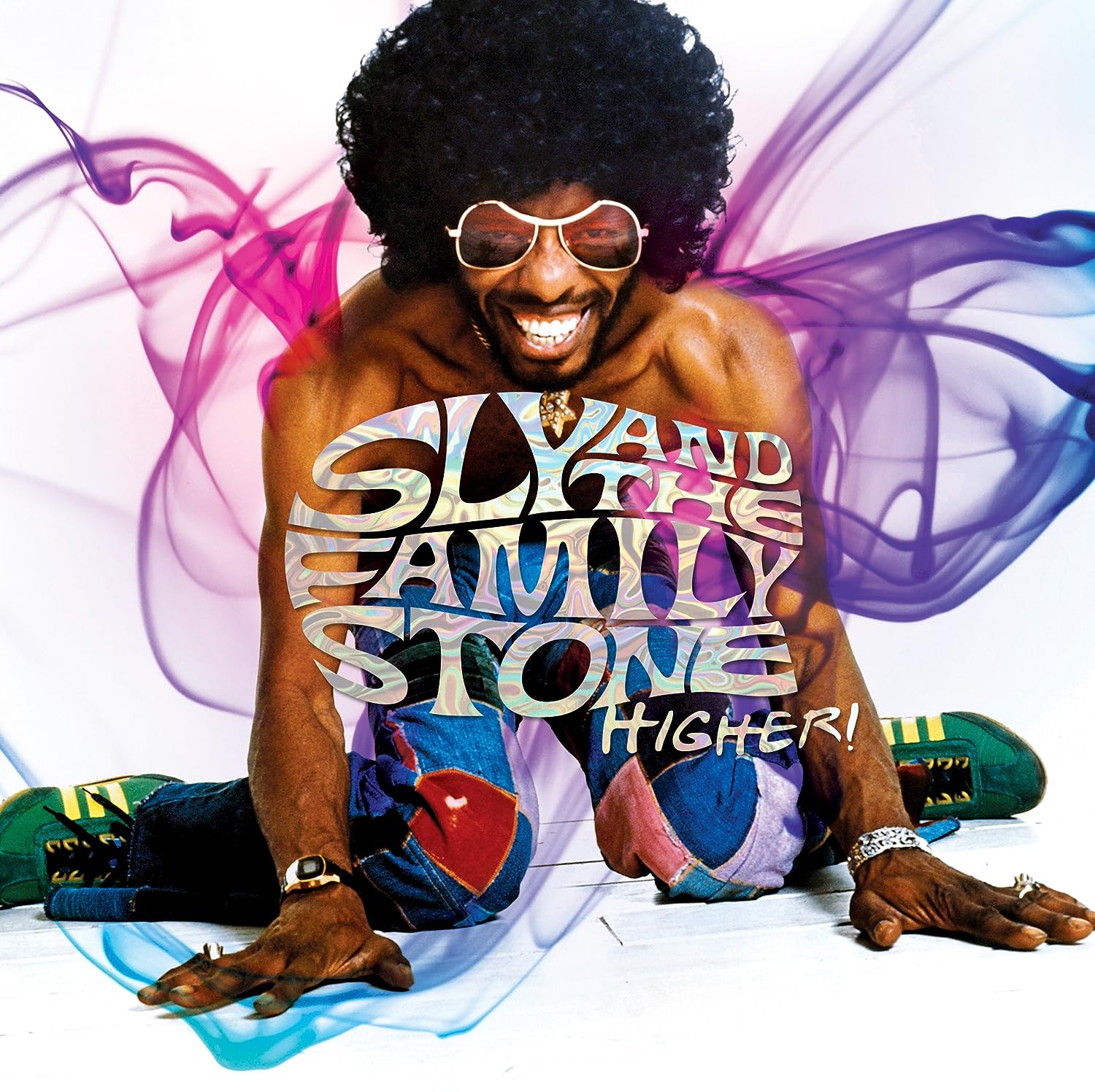 Sly & The Family Stone laid down a template that not only inspired an era of youthful rebellion and independence as the ’60s turned into the ’70s, but also had (and continues to have) a potent effect on the course of modern music in general. Sly’s DNA is traceable to every cell of the musical stratosphere.

“Sly Stone’s music is relevant because he was able to take from all the influencing genres before him and along side him, and combine it like gumbo,” said Public Enemy frontman Chuck D. “Then inside the band, having women, having it mixed race and ethnic background − I mean, come on now. You really couldn’t point and say ‘well, this is the reason why it’s funky,’ it’s all this together like gumbo that’s making this happen. And Sly & The Family Stone was the epitome of a group playing the music, saying the lyrics, and also backing with the words.”

Sly & The Family Stone have been inducted into the Rock And Roll Hall Of Fame and the Grammy Hall Of Fame, and have received the R&B Foundation Pioneer Award, among many other recognitions of their importance and enduring influence.

Higher! is a tribute to the far-reaching horizons of Sly & The Family Stone. Their repertoire, every composition penned by Sylvester Stewart aka Sly Stone, kept the Pop and R&B charts jumping for seven glorious years from 1968 to 1975. There are the three career-defining RIAA gold Billboard #1 Pop/#1 R&B hits, “Everyday People,” “Thank You (Falletinme Be Mice Elf Again)” and “Family Affair.” Their signature Top 40 hits began with “Dance To the Music” and went on to include “Stand!,” “I Want To Take You Higher,” “Hot Fun In the Summertime,” “Runnin’ Away,” “If You Want Me To Stay,” “Time For Livin’,” and more. Their top-charted RIAA gold, platinum and multi-platinum albums include Stand! (1969), Greatest Hits (1970), There’s A Riot Goin’ On (1971), and Fresh (1973), every one a must-have.

In addition to those durable numbers (all of which are in mono up through 1969’s “Thank You (Falettinme Be Mice Elf Agin)”), Higher! opens CD One with seven pre-Epic Records tracks. These include five rare solo sides by ‘Sly Stewart’ during his time as A&R-producer-songwriter-staff musician circa 1964-’65 at San Francisco’s Autumn Records. These include both sides of the rare (and widely bootlegged in the U.S. and Europe) Loadstone Records single of January 1967 by Sly & The Family Stone, which helped win the band their Epic Records deal. One of these sides is a cover of Otis Redding’s “I Can’t Turn You Loose.” The Epic story begins with the mono single master of “Higher” in May 1967 (Disc One, track 8).

Of the many impossibly rare and fascinating inclusions on Higher! special attention is paid to the four tracks that close CD Three. They were recorded live at the Isle of Wight Festival in the UK, early Sunday morning, August 30, 1970, one year after Sly’s memorable wee hours performance at the Woodstock Music & Art Fair. Two of the Isle of Wight numbers, “Stand!” and “You Can Make It If You Try,” were subsequently issued on the Columbia three-LP release from 1971, The First Great Rock Festivals Of The Seventies. (The big multi-artist package coupled Isle of Wight performances with others at the first Atlantic Pop Festival of July 1970.) The two other numbers by Sly & The Family Stone at Isle of Wight, namely “Dance To The Music” and the medley of “Music Lover / I Want To Take You Higher / Music Lover” (a variation on their medley from the Woodstock soundtrack album), are both previously unissued until now.

Higher! serves as a new model for the most diligent and imaginative efforts that can go into a vintage collection of this nature. The box set was produced by Legacy Recordings veteran and Sundazed Records owner Bob Irwin, with Project A&R by Rob Santos at Legacy. All music was mastered by Vic Anesini at Battery Studios in New York.

Three major elements are central to the 104-page book. There is the authoritative liner notes essay written by Jeff Kaliss, author of I Want To Take You Higher: The Life And Times Of Sly & The Family Stone, the group’s only authorized biography. The booklet also contains a comprehensive, lavishly-illustrated timeline compiled by Dutch authorities Edwin & Arno Konings. Nearly 100 entries span from March 15, 1943 (“Sylvester Stewart is born in Denton, Texas. Six months later, the family moves to Vallejo, California”) to a final update in late-2012. The Koningses have also contributed track-by-track annotations for all 77 cuts in Higher! The notes contain excerpts from Thank You, the Koningses’ own forthcoming biography of Sly & The Family Stone. (Go to www.slystonebook.com). The extensive memorabilia that accompanies the text and photographs in the book is provided by Neal Austinson, Archivist and Road Manager for Sly & The Family Stone.

Every track-by-track annotation contains at least one revelation, as told to the writers by original Sly & The Family Stone band members Greg Errico, Larry Graham, Jerry Martini, Cynthia Robinson, and Sly Stone himself, as well as such figures as Rachel Donahue (widow of Tom Donahue), managers Rich Romanello (1967) and David Kapralik (1967-1972), Epic A&R man Stephen Paley, bassist Rustee Allen (who succeeded Graham in 1973), all three drummers who succeeded Errico post-1971 (Gerry Gibson, Andy Newmark, Bill Lordan), various background vocalists, saxophonists, bassists, and so on. All their collective statements and observations, as transcribed by the Koningses, add to the value of Higher! as a valuable memoir in and of itself.

“Refracted in these treasures,” Kaliss says of the kaleidoscopic delights on Higher! “are colors you may be unused to seeing in Sly: old R&B, jazz, nursery rhymes, gospel, and even country, fused and transformed by a precious visionary and his fellow musical alchemists.”

In addition to Jeff Kaliss, and Edwin & Arno Konings, other essential reading includes: Sly and the Family Stone: An Oral History by Joel Selvin (HarperCollins, 1998); and There’s A Riot Going On by Miles Marshall Lewis (Bloomsbury “33 1/3” series, 2006).